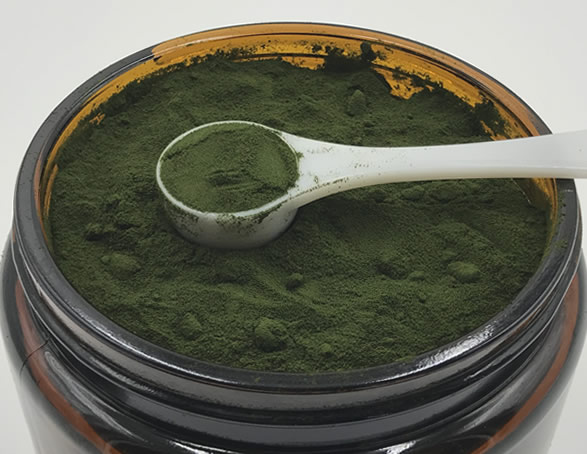 Wheatgrass is the first young green leaves that sprout from germinated wheat grains [1]. The grass leaves are harvested at the jointing stage, when the stem of the plant starts to form[2,3], because this is when the leaves are at their nutritional peak[4,5].

When grown in optimal conditions, wheatgrass contains most of the known vitamins and minerals [6], 297 proteins[7], over 80 active enzymes including the anti-oxidant and anti-ageing enzyme superoxide dismutase (SOD), fatty acids, immunomodulators, growth hormones, phytonutrients such as chlorophyll, carotenoids (including alpha-carotene, beta-carotene, xanthophylls, and zeaxanthin), bioflavonoids, growth factors, RNA and DNA, and a group of unclassified micro-nutrients simply referred to as grass juice factors[6].

The most widespread and popular method of processing wheatgrass is juicing, typically by cold-press or masticating juicers, or via triturating twin gear juicers [9]. This process crushes and squeezes the raw grass, with the liquid efficiently extracted from the dry pulp. The dry pulp mostly contains the non-nutritional cellulose fibre, which offers no vitamins or minerals and slows down the digestion. The liquid, referred to as wheatgrass juice, contains concentrated highly bio-available nutritients[10], and is retained and consumed.

What are the benefits of wheatgrass?

In a randomised double-blind placebo-controlled trial [17], 23 human patients with active ulcerative colitis (an inflammatory bowel disease) were randomly grouped to receive either 100 mL (3.4oz) of wheat grass juice, or the same volume of placebo, daily for a month.
Disease activity index, bleeding faeces and number of bowel movements were all monitored, in addition to sigmoidoscopic evaluation, and global assessment.
The wheat grass juice group showed significant reductions in disease activity index and severity of rectal bleeding, in contrast to those receiving placebo.
No adverse effects of wheat grass juice were observed.

In a small study on 16 humans with the blood disorder thalassemia, that leads to anaemia, 100 mL (3.4oz) of wheat grass juice was consumed per day. 50% of patients had at least 25% reduction in transfusion requirements, average time between transfusions increased 30%, and no adverse side effects were reported. On the contrary, patients reported general well-being, improved appetite and reduced musculo-skeletal aches and pains [19].

A double blind human study found that supplementing with grass juice for 71 days found a significant increase in leukocytes and a decrease in lymphocytes in the blood, suggesting that grass juice supplementation could result in a more efficient first line of immune defence [21].

A long term human clinical trial in patients with various skin diseases (everything from acne to eczema to atopic dermatitis), who were selected for their resistance to clinical drugs, found that grass juice powder (4 grams, three times per day) was over 80% effective after a period of 1-6 months, with no side effects [25].

A study on mice fed grass juice powder as an addition to their food, found a significant increases in endurance and motor activity [24].

A similar test tube study found that after incubation with grass extract for three hours, levels of pesticides were significantly reduced; malathion and chlorpyrifos by 100%, parathion by 75%, diazinon by 54%, guthion by 41% and methidathion by 23% [23].
This study also confirmed that when the grass extract is exposed to heat, the ability to detoxify or reduce the malathion level is lost.

Wheatgrass contains an oxidoreductase called peroxidase [7], which is an enzyme that breaks down hydrogen peroxide, one of the toxins produced as a by-product of breathing oxygen[38]. In order for peroxidase to function, it requires NAD+ as a cofactor[39].
NAD+ levels naturally decline as we age [40], and can be restored by supplementing with the NAD+ precursor, NMN. So it can be theorised that supplementing with NMN may help to get the most from wheatgrass.

We believe that our wheatgrass juice powder is among the very best in the world, due to the species of wheat used, the growing conditions, the processing methods, our unique packaging that removes oxygen from the pack for at least 40 openings, and our third party lab testing for every batch.

Each batch of our wheatgrass is tested by third party laboratories, to ensure that there are no dangerous levels of heavy metals or micro-organisms. The certifications for the latest batch are viewable below.

Any retailer or producer of wheatgrass should be able to show you these tests from a third party laboratory. Without third party testing, it’s completely unknown whether the product is what it claims to be, and whether it’s safe for human consumption.

Kamut® refers to the species of the wheat grain used, an ancient variety of wheat called khorasan. Kamut® has never been hybridized or genetically modified, unlike modern wheat. The theory is that its retained many desirable qualities that have been lost or changed through the intensive breeding programs that have significantly altered modern wheat[28].
Kamut® wheat is organically grown, and gram for gram has several nutritional advantages over modern wheat [29], but crucially for our application growing high quality wheatgrass, each grain is 34% larger than standard wheat grain.

Studies have shown [30,31] that while good quality organic soil is important, a significant amount of nutrition in the grass comes from the initial nutrient base of the seed. With Kamut® grain, the seed is 34% larger than standard wheat, with 34% more nutrients for the grass to utilise.

Field grown refers to the fact that our wheatgrass is grown outside, in organic soil, in fields on an organic farm. The wheatgrass grows at a natural rate for several months, before being harvested, as opposed to about 10 days for wheatgrass grown in trays, resulting in a much higher nutritional content[6].

Juice powder means that this product is the solids of the juice of the wheatgrass.
Having been organically grown for several months outside in organic soil, our wheatgrass is harvested just before the critical jointing stage, where the grass is at peak nutrition.
It is immediately transported to the farm’s on-site juicing facility.

The juicing process crushes and squeezes the raw grass, with the liquid efficiently extracted from the dry pulp. The dry pulp mostly contains the non-nutritional cellulose fibre, which offers no vitamins or minerals and slows down the digestion. The liquid, referred to as wheatgrass juice, contains concentrated highly bio-available nutritients [10].

A modified freeze-drying method then removes all moisture from the freshly squeezed juice within a few minutes, leaving just the solids from the juice in the form of juice powder. These juice solids, known as wheatgrass juice powder, are vastly more nutritious than whole leaf wheatgrass powder[32].

Raw refers to the fact that from the harvest of the grass to the juicing of the grass, to removing the moisture from the juice, to the packaging of the juice powder, the material remains raw. It’s not heated above around 40°C (around 104°F). This is very important for the preservation of the active enzymes, vitamins, minerals and phytonutrients that are denatured or destroyed by heat.

When water is added to our wheatgrass juice powder, the resulting liquid is virtually identical to freshly squeezed wheatgrass juice, as the only processing that was done to the original juice was the removal of the water at low temperature. All the live enzymes, vitamins, minerals and phytonutrients remain active, due to avoiding exposure to heat, light and oxygen during processing, and being able to harvest, juice and powder on-site at the farm.

Although our wheatgrass is non-GMO, gluten free, herbicide and pesticide free, and grown and processed organically, PlantPills has not yet applied for organic certification in the UK, so we can not yet claim that our wheatgrass is organic, and do not sell it as organic.

For details about dosage, guidelines, prices and worldwide delivery, please see our retail site at plantpills.co.uk